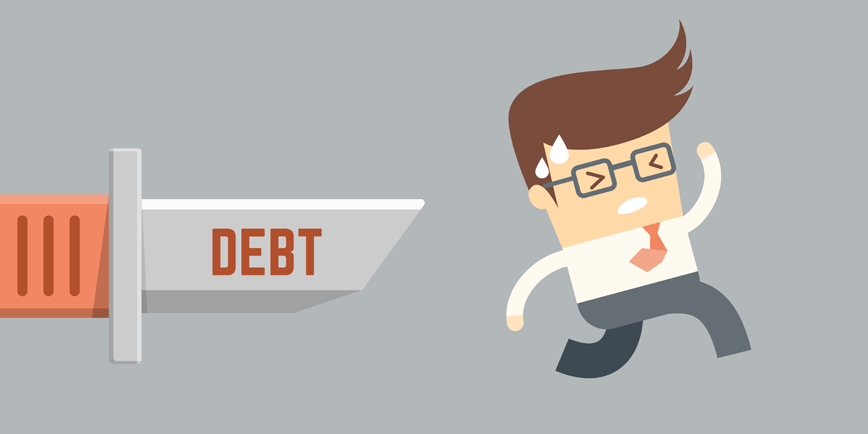 ‘To Err is human’, but a human in desperation can take even bigger erroneous decision with his/her money. Bad debt decisions remains a primary reason of why people have low savings. These decisions are made in haste, under the influence of emotions and due to lack of knowledge.

It is quite understandable that every individual may need to take a loan at some point in time, but the challenge in the current scenario is that loan has become a ‘cool’ product to buy instead of being it a contingency based product.

Rajesh (25) realized this the harder way when he first bought a phone worth INR 25,000 which was more than half of his salary (INR 40,000). What he had was an EMI option in the online retail store which made the phone look affordable. All he needed to do was to pay INR 4,500 per month for 6 months .But unfortunately he lost his job and left out to pay the EMI of INR 4,500 per month for remaining 4 months out of his savings as there were no cash inflows till he got a new job.

What we learn from Rajesh’s story that taking a loan for a mobile phone has become so easy but repaying it remains difficult throughout.

There are some more decisions people take related to debt where they end up paying more than required or end up in a soup where they can’t plan anything further until the loan is repaid.

Some of these decisions which you should stay away from are mentioned below:

Imagine asking a loan from yourself and paying interest to someone else. Sounds silly? Well, surprisingly you have certain option available in form of loan against the investments where the rate of interest to be paid is more than the interest received from the investments. For example, endowment policies which are giving not more than 5% returns have a loan option where you can borrow money which is 90% of the surrender value at an interest rate of 9.5% -10%. What it means that if you close the insurance policy, you will get an amount which can be used to achieve the goal and this would help you in getting rid of useless policies, but if you choose to take a loan, you will also have to pay interest, repay the loan amount and pay the premiums for the insurance policies. Some of the Fixed Deposits also have such an option for taking loans.

Overdraft is a facility where the bank can allow to withdraw more amount than the current balance. This amount is subject to an increased rate of interest. This is basically a credit card without a card where you take out more than you have and repay it in future. The problem with the overdraft is that it is easy to avail and the overdrafts have high rate of interest associated with them on the overdrawn amount.

From a mobile phone to home, everything can be bought through EMI, which will makes a miser and a prudent individual to spend money on it. Easy EMI is an unknown devil in the disguise of a known friend. These easy EMIs have a very high cost associated with them and at the end of the day you eventually end up paying more than the MRP of the product you buy.

Nobody likes to have a debt laden life. Whenever we seek an opportunity where a lump sum cash arrives, the only thing that comes in mind is to pay off or partially close the loan so that the EMI’s or the remaining tenure of the loan is reduced. This generally happens with home loans. But the home loans have Tax Planning Benefits which reduces the net interest paid towards the loan, hence before paying off a loan one needs to understand the tradeoff between prepayment of loan and potential gain from the lump sum amount if not used to make the prepayment. There may be a chance where the future value of the investments can be used to completely pay off the loan instead of making a partial payment now and still paying EMI’s for the remaining tenure.

BORROWING IN CASE OF EMERGENCIES

Investing for future needs is a good habit and should be done by everyone, but while planning for such investments one thing is always ignored i.e. investing for contingencies. What if you lose your job or you have an urgent need of money? We end up borrowing from friends and family, take personal loan, or even worse borrow from local lenders at a higher rate of interest. This despite having sizeable investments in real estate, gold or even stocks. This habit of not having enough liquidity and borrowing in such manner can have a long term impact on personal finances.

Direct vs Regular Mutual Funds, which one is for you?
April 8, 2019