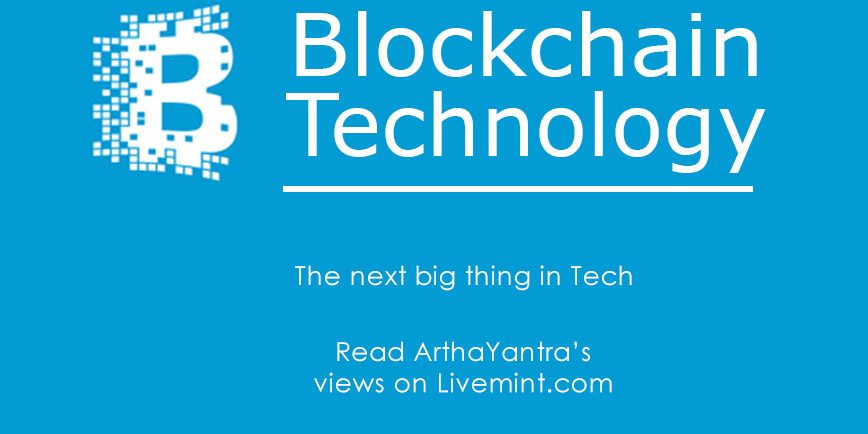 Last week, Craig Steven Wright, an Australian entrepreneur and self-declared cyber security expert, revealed his identity as Satoshi Nakomoto, the inventor of Bitcoin alternative currency and blockchain technology. Though it is not clear if his claim is indeed true, the story has shifted at cyberspeed from bitcoins to blockchain technology.

You may have heard the word blockchain. And you will continue to hear it as the technology goes mainstream.

Blockchain is a digital ledger software code. A ledger is a collection of financial records. In the digital age, the ledger is a code. You can still see what comes in and goes out, and to whom, but this information is now available in digital format and at one place. Blockchain doesn’t mean digitisation of a physical ledger, but it is another way to record a ledger. “Essentially, it’s a record keeping technology, but the difference is that the recording happens on consensus, which is built into the system itself,” said Vivek Belgavi, partner, financial services–fintech and technology consulting leader, PwC India. Blockchain is the technology underlying the use of bitcoins. It is an architecture on which you can build applications for different needs.

How is it different?

At present, for any transaction, a reconciliation is required to ensure that the transaction is genuine. “Any activity that requires a multi-party interaction needs to be reconciled separately,” said Belgavi. Blockchain built applications don’t need reconciliation of any transactions because all information will be readily available and verified for anyone to see if she is part of a particular blockchain ecosystem. Nitin Vykaranam, founder and chief executive officer, Arthayantra.com, a robo advisory financial services company, explained this with the example of a property sale. Let’s assume there is a house seller and a buyer. Once the deal is sealed, in the blockchain world, this transaction gets recorded with all details such as date, and value of ownership and title, either at the builder’s office or the registrar’s office, whoever is part of the property deal ecosystem. Later, the new owner decides to sell. The next buyer will have access to all details in the blockchain system that are pre-recorded and verified. The need for tedious paperwork and verification of title is removed.

Blockchain is a decentralised ledger, which means all system members can access stored information. Verification by an intermediary is not needed.

What is its advantage?

In the current setup, for reconciliation, manual intervention is required, such as a phone call, a physical document or emails, which is done through an intermediary. With blockchain, since there is no need for reconciliation, an intermediary is not needed, which is usually the back office in most businesses. This helps reduce cost. So, blockchain can be useful in sectors with high intermediary costs. Additionally, the application built on this technology is believed to be difficult to break into. Saket Modi, chief executive officer, Lucideus Tech, an enterprise cyber security company, said, “When you make any transaction, you have to sign it off using a digital signature which is cryptographically encrypted and is difficult to guess (hack into). As every added block broadcasts the transaction into a public ledger, in case of fraudulent transaction, every node can spot it and deny the proceedings. There are also implementation specific vulnerabilities at the application layer that can pop up depending on the instances the blockchains are used in.”

Blockchain technology is also expected to reduce the transaction duration. It is believed to be useful for any sector that has complex and large scale back-office processes that may involve phone calls, emails and paperwork, for example, banks and remittance business. Similarly, the technology can also be used wherever there is a need for reporting, transparency and dissemination of data, say, stock exchanges and clearing houses.

Though the blockchain technology emerged from cryptocurrency, it is not restricted to bitcoins or even to the financial sector. Globally, different sectors are trying to make it work for various needs. For example, according to experts, it can be useful in health care, the property market, car leasing business besides for financial services entities such as banks, investors and broking firms. “Blockchain is essentially a decentralised ledger and its application can find use in multiple industries from lending, insurance and banking to book keeping in real estate and using the latest Internet of Things technology in gadgets around your house,” said Vykaranam.

For instance, last year, the Honduras government engaged a technology company to build a system to record transfer of land titles using blockchain. The objective of this pilot project was to put all of the government’s land titles on blockchain.

Belgavi said the technology’s usage could range from the simplest of applications to those that help in seamless recording of sensitive information. “For instance, within an organisation, the technology can be used as a reconciliation tool for operations by geography or for managing vendors in cases where there are multiple dealings. PwC has built an application for disbursement of funds, which creates transparency in allocation to different beneficiaries,” he said.

Globally, banks such as UBS Bank, ABN Amro and Deutsche Bank are trying to find ways to use blockchain. London-based Earthport, an Internet payment infrastructure provider, is adding it to its existing product lines.

In India, banks such as Axis Bank Ltd are also aggressively looking at blockchain technology. “The biggest thing in financial and accounting is ledger—keeping track of debit and credit. Also, in case of forex, the back office of each bank needs to speak to the back office of the other bank. Blockchain has immense potential to eliminate back office in banking, especially for trade finance,” said Amit Sethi, chief information officer, Axis Bank. To begin with, he said, it can be used for high-volume corporate transactions and then slowly replicated in the retail setup. “Using it at present for retail banking, for example, will be a challenge,” said Sethi.

To help banks use blockchain, companies such as Tata Consultancy Services Ltd and Infosys Ltd have started to look at ways to build applications around it. In April, Infosys launched blockchain framework for financial services. A year-and-a-half back, it was doing a research on new technologies worldwide, which got it to blockchain. “We looked at blockchain in much more detail. We got 40-50 employees trained,” said Rajashekara V. Maiya, head-financial product strategy, EdgeVerve Systems, a product subsidiary of Infosys. “Blockchain-based application can be a disruptor for capital markets, brokerages, stock exchanges… wherever reconciliation is required. When we were looking to build something for the banking sector for frictionless banking, we came out with ways to use it for trade finance. In trade finance, the involvement of document and cost of communication through SWIFT can be eliminated using blockchain technology. The settlement can be much faster. The framework we have created is for a network of banks,” he added.

Banks will, of course, look for signals from the regulator. In February this year, at the Mint Annual Banking Conclave, S.S. Mundra, Reserve Bank of India’s deputy governor, said a massive disruption is possible based on the technology using blockchain, which would make distributed ledger possible. “For the uninitiated, ‘distributed ledger’ allows a payment system to operate in an entirely decentralised way, without intermediaries such as banks. The banks would need to either develop their own capability or seek proper alliances. I say this, however, with a caveat that we or rather the global regulatory community elsewhere, have not taken a final stance on the use of distributed ledger technology,” Mundra had said. RBI has set up a committee to understand the possibility of using blockchain technology.

Despite the enthusiasm around what this technology can do, widespread use in financial services or other sectors is yet to be seen. “It’s a nascent platform and not yet in application mode. But many leading organisations have started pilots to explore possible ways to use it. Scalability and ability of the platform to use the consensus based technology efficiently for transactions requiring low latency are to be verified,” said Belgavi.

Others question whether decentralisation will get global acceptance. After all, money management has an element of control, which enables focused interactions. According to Modi, financial institutions have centralised control on money management and if technology decentralises this, the power entrusted with an institution may be questioned. “Hence, it’s hard to say whether blockchain will get adopted completely in the financial services space in the near future,” said Modi.

The key is to facilitate transactions rather than replace an existing system. Blockchain-based applications can’t work in isolation and require a network to come together.

Though blockchain is a public ledger, there are applications being tested to make it private for specific needs. At the end of the day, if a bank decides to record transactions on blockchain, it will have to ensure that all users start using the same technology, and in a country like India, that could take some time.

Diversification key for Financial Success
May 31, 2021