Why You Should Get Rid of Your Fixed Deposits 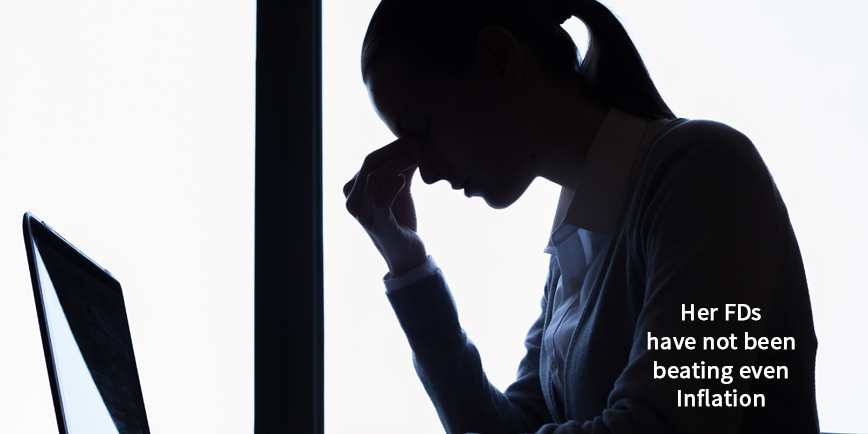 Imagine a car your father bought when he was young, let’s say it was a Fiat Padmini. It was a good car which has power, was fuel efficient and was accommodating. But, can you imagine driving it now? No, right. You would probably buy a new sedan or a Hatchback with all new features and more leg room and a power steering with automatic windows and central locking which was there in the old car your father had. But on other hand we still like to follow the age old savings techniques of doing Fixed deposits, recurring deposits and keeping money in lockers or worse keeping too much in cash despite the fact that there are alternatives under which are more effective, flexible and in fact can give inflation beating returns which these traditional ways fails to do so. We are talking about investing in debts funds.

Debt mutual funds are a type of Mutual Funds which are invested towards bonds, debentures, money markets and similar debt instruments. Although it is a mutual fund but they are not much effected from the equity market movements. They are affected by interest rate movements and performs well when the interest rates are low. Since the past couple of years these mutual funds have done well and are giving returns which are better than the traditional fixed income savings scheme as these schemes have seen a sharp drop of around 1%-1.5%.

Amongst these debt funds, money markets or liquid funds are a suitable alternative for savings. These funds have their investments towards treasury bills, commercial papers,  certificates of deposits which are loans having maturity period of very short term ( less than a year) which means they are very liquid and withdrawn at any point of time post the investment is done. But apart from the liquidity benefit of the funds the average returns from this category is around 8.5% per annum whereas a fixed deposit has an interest rate of 7.3% – 7.7%. But the real benefit is not only the returns, they are other features of these funds which makes them a better option than the FD’s.

To understand the tax effectiveness, let use an example –

Suppose an investor puts an amount of INR 5 lakhs in a fixed deposit as well as a money market fund with an objective to withdraw the gains on the amount invested every year.

Even in case the returns from both the cases is similar, money markets still would be a better option. In money markets when the investments of INR 5 lakhs was made, investor would have got some units on a NAV price. In the above example the NAV was 1,000, it means the units bought were 500. After one year the returns were 8.5% so the NAV was 1085 and the net gains on the amount invested was INR 42,500. If the investor withdraws this amount at an NAV of 1085 the units would be 39.17. The tax would be applicable only on 39.17 units and not the total amount invested i.e. INR 5 lakhs whereas in Fixed Deposits the tax is on the total investment made.

Although popular among masses as a non-risky investment avenue, FDs give lower returns than the inflation. It is a myth that FDs grow money. Even then majority of Indians invest in FDs because they are afraid to invest in the markets, which is beyond their comprehension as they dynamics of the markets are too complex. However, with the advent of FinTech, quality Financial Advice is available at a fraction of a cost that it normally used to cost before and if you have your own trusted financial advisor beside you, you can and should invest in the capital markets to get higher returns on your hard earned money.

All you need to know about debt mutual funds in current crisis
May 6, 2020